There’s Something in Absentia

On Absence and Return 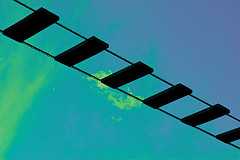 Absence is often considered an intentional void, a failure to be rather than the result of a distraction or restriction. There is often a condemnation involved, at least implicitly. A list of absentees, absenting oneself from a vote, being absent without leave – none of these measure or define behaviour deemed appropriate. Yet an absence is simply the lack of an expected presence, a disappointment only because it defies what we want rather than determines what is probable, or perhaps even possible. Absence speaks to our suspicion, whispers that someone else has erred.

How, then, do we rein in our expectations, or the presumption that a regular presence is necessarily and alone a good presence? One way would be to appreciate the aggregate rather than the individual. What do we achieve together more meaningfully than alone? Teams tend to outperform the combined capacity of their individual members, and societies – by and large – maintain the trajectory of their change despite emigration and remigration. It would be difficult to define either of these examples as a form of stability, yet they both indicate that a certain type of continuity has greater value than even the most identifiable absence. Sure, any sports fan could cite a team that failed after one member left (Michael Jordan’s first retirement, anyone?) but on a social scale, even with an increase of absences, the dilution is barely measurable.

Of course, this all goes to prove that my recent lengthy absence from the blogosphere is a small nothing in a vast ocean of somethings. But it’s so often difficult to escape self-censure, which is ultimately the whisper of the ego against the roar logic. No wonder I have ringing in my ears.

This entry was posted on Tuesday, July 14th, 2009 at 1:25 am and is filed under Blogging, Life. You can follow any responses to this entry through the RSS 2.0 feed. You can leave a response, or trackback from your own site.